Did you know that every bottle a Canadian craft distillery produces comes from local grain or fruit producers in your area?

Moreover, Canadian craft distilleries employ dozens of local residents who support their families in their local communities. To highlight how much of a driver every community’s local distillery could potentially generate, each 200-litre barrel of Canadian whisky produced requires one ton of local grain grown by local farmers. Every bottle of gin or vodka made requires 20 pounds of locally grown Canadian apples or fruit.

Some of you might be wondering: What is craft? And what does farm-to-flask mean? In order to qualify as a craft distiller in British Columbia, you must satisfy the following:
• Only B.C. grain, fruit and produce used for fermentation;
• Only on-site fermentation and distillation using traditional methods;
• No additives, preservatives or artificial flavours;
• No neutral grain spirits used. Neutral grain spirit is bulk alcohol produced and sold by industrial distilleries that allows some distillers to bypass the craft of producing fermentable mash to create their own alcohol;
• Total annual production cannot exceed 100,000 litres, which is less than one day’s production for many larger distilleries. 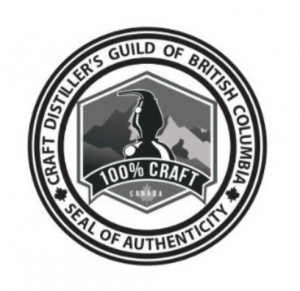 Image: Contributed
This seal proves your beverage was made entirely in B.C.

The Craft Distillers Guild of BC represents the micro-distilleries in B.C. that are recognized by the provincial government as being “craft” operations. The guild formed originally to open dialogue with the government about the changes necessary to make micro-distilling in B.C. a viable industry. Today, the Craft Distillers Guild of BC has several missions. These include continued dialogue with both the provincial and federal governments, ensuring quality standards are met among members as well as public education efforts.

In 2013, the B.C. government established two categories of distilleries in the province: commercial and craft. Commercial distilleries can be of any size, and they can use anything to distill from, including neutral grain spirit.

When you support local Okanagan distillers by enjoying their 100% B.C.-made products, you are creating economic opportunities through “farm-to-flask.” There is an opportunity to help support and grow the distilling sector, the Canadian agricultural sector and the economy as a whole as recovery from the pandemic begins. We encourage everyone to visit Craft Distillers Guild of BC members to learn more about what being a true craft distillery means in B.C. You can find all members’ websites here.

Happening right now in the valley, Okanagan Spirits CEO Tyler Dyck has started a petition to call on the Canadian government to support Canadian and B.C. distilleries seeking excise parity with U.S. craft distillers south of the border. Since the U.S. reduced its excise rate for small U.S. distilleries in 2017, there have been more than 1,000 distillery starts, requiring tens of thousands of great paying local jobs and hundreds of thousands of acres of domestic local agricultural production. Talk about locals powering local products and local culture.

We can all help. Join Canadian craft distilleries, the Canadian Chamber of Commerce, and Canadian farmers and orchardists by calling on the government to match the U.S. small distillery reduced excise rate that has led to such a massive increase in employment and domestic agricultural development south of the border.

That petition can be found here.